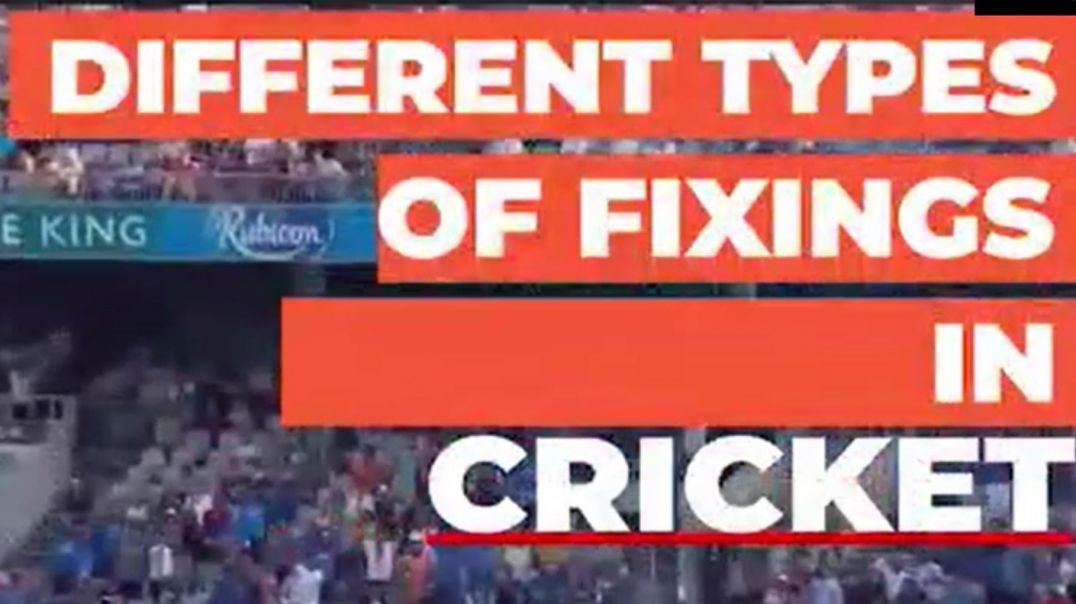 Cricket Fixing - All types of fixing explained by Amit CBTF

⁣Cricket Fixing - All types of fixing explained by Amit CBTF Cricket is a notorious sport in terms of betting and match-fixing. You can go through the history of IPL winners or other aspects in which the bookies have bribed the players to turn the match in their favour.

When the players are paid off by the gamblers, they have a predetermined outcome of the match. This practice is a violation of law and the rules & regulations of the sport but the gamblers hugely wager on cricket events to draw out maximum profits.

In IPL match history, Test or ODI matches, there have been some renowned fixing scandals that you must know.

Cricket is not just a sport but an emotion for the Indian cricket fans but the bookies see it as an opportunity to win huge bucks. There have been many matches in cricket history that have witnessed the biggest scandals, thrashing the convict into legal boundaries. You must have known the history of IPL winners but ever wondered how many of them were fixed?


IPL All time Winners: Unveiling the Faces Behind the Victory
S. Sreesanth

The 6th season of IPL didn’t seem to be very fortunate for some star players of Indian roots. For being involved in spot-fixing, Delhi police convicted three cricketers, Ankeet Chavan, S. Sreesanth, and Ajit Chandila of the squad Rajasthan Royals.

Proceeding the investigation, a few more names were found associated with the scandal, including actors and co-owners - Vindu Dara Singh and Gurunath Meiyappan, for provoking illegal ground activities during the match. Later, these personalities were ascertained of having connections with underworld kings, Dawood Ibrahim and Chhota Shakeel.

However, the lack of rigid evidence and misconnection among the police officials encouraged them to release without being charged with any conviction.

In the year 2000, one cricket match-fixing scandal shocked the international cricket fraternity when Cronje was spotlighted as a name involved in gambling.

Cronje had a fascinating cricketing history that fans admired him for. Delhi Police suspected something fishy between Hansie Cronje and Sanjay Chawla.

This incident came into the limelight and the South African cricketer had the fixing setup, backed by a renowned Indian betting syndicate, Sanjay Chawla.

At the time of the initial conversation, Cronje tried to back off from the charges but a thorough cross-examination broke him down, accepting the charges. He was banned completely from cricket for a lifetime. Moreover, in 2002, he took his last breath before the plane crash that aired the rumours of his murder.

Mohammad Azharuddin was a brilliant captain and efficient player of the Indian squad during the 90s but he couldn’t escape from the charges of spot-fixing in 2000.

While Cronje was suspected, he revealed Azharuddin’s misdeeds as well and told the officials that Azhar brought him in with bookies. Both were guilty of indulging in fixing 3 ODIs and this practice banned them for life but in 2012, Andhra Pradesh High Court set him free.

Salim Malik captained the Pakistan team who emerged as a stupendous cricketer in the 80s and 90s. He managed to maintain his cricketing charm till he wasn’t suspected of any link with one of the match-fixing scandals.

Breaking off the records, he was the first cricketer who was banned for spot-fixing in the 21st century. During the match tour in South Africa and Zimbabwe, Salim took a bribe from the bookie for under or over-performance. Despite being caught, he continued to play cricket with no charges.

However, after managed to play 100 Test Matches, the authorities sentenced him to life which put an end to his career.

Shane Warne and Mark Waugh received the bribe under the table in 1994-95 when they leaked information about the pitch and weather updates to an Indian bookie, John.

Initially, the Australian Cricket Board exerted efforts to wrap up the case under the carpet. Surprisingly, when they were convicted of gambling, both denied revealing their insights into the gameplay.

The star players had a strong connection with gambling to get more profitability from the cricket matches. In the IPL match history, ODIs, World Cup or any cricket tournament, bookies don’t back off from gambling.